Peanuts: The Story Behind the Trans-Fat Free Oil

The secret behind the Chick-fil-A® Original Chicken Sandwich is a tough one to crack. In a nut shell though, part of the secret is actually … in a nut shell. It’s peanut oil.

Chick-fil-A is the single largest buyer of U.S. peanut oil.Local restaurants around the country use 100 percent refined peanut oil to pressure-cook all of its breaded chicken. It’s a decision Chick-fil-A founder S. Truett Cathy made decades ago after experimenting with various oils.

“Like most things Truett did, he just made decisions that were good for our food and good for our customers,” said Shona Jonson, Chick-fil-A’s ‎Culinary Senior Manager. “I don’t know what you’d call it – serendipitous or magical – but the peanut oil makes our chicken sandwich nearly impossible to replicate.”

Despite its name, the peanut is actually a legume, not a nut, and it contains about 50 percent oil. Peanut oil has a light, nutty and slightly sweet flavor that is relatively mild. It doesn’t pass on much of its flavor to foods that are cooked in the oil, which means the chicken simply tastes like chicken.

And the peanut oil not only helps create the iconic taste of the chicken sandwich, but also provides other benefits.

Peanut oil is a vegetable oil that is one of the healthiest. It’s naturally free of trans-fat, so it remained part of the chicken sandwich recipe after Chick-fil-A removed all trans-fats from its menu in 2008, seven years before the FDA required restaurants to start phasing it out. Peanut oil is also naturally free of cholesterol and is low in saturated fat. It contains a large percentage of healthier fats – especially monounsaturated fats – that are considered heart-healthy or heart-neutral fats.

“Peanut oil is a vegetable oil that is one of the healthiest. It’s naturally free of trans-fat.”

Because peanut oil doesn’t begin to break down until after it reaches 450 degrees Fahrenheit – which is called a high “smoke point’ in the industry – it holds onto its health benefits even during cooking, unlike some other oils.

“We strive for fresh ingredients in every way, so we carefully monitor peanut oil use and quality,” said Jonson.

Chick-fil-A goes through so much peanut oil that it doesn’t last the restaurants long; that’s one of two reasons Chick-fil-A eliminated a preservative normally added to oils called TBHQ. The second reason is that without preservatives, the peanut oil is a more natural ingredient.

Anyone dealing with a peanut allergy understands the danger of allergic reactions. The protein in peanuts makes it the leading food-allergy-related killer in the U.S. However, Chick-fil-A’s peanut oil suppliers use a complex process to purify the oil. This refining process removes the protein from the peanut oil that triggers an allergic reaction.

Chick-fil-A restaurants purchase their peanut oil from certified suppliers that guarantee their refining process will remove any and all proteins that cause allergic reactions. Not all peanut oil is treated equally, so consumers should exercise caution when buying food or ingredients with peanut oil.

Peanuts are a major crop in the South – Georgia, where Chick-fil-A is headquartered, is the largest producer of peanuts, followed by Florida, Alabama and Texas. 1,600 local farmers produce and supply this nutritionally rich crop to Chick-fil-A, and the vast majority of the restaurants’ peanut oil comes from the U.S. In addition to peanuts, Chick-fil-A sources apples, potatoes, lemons, chicken, and other fresh produce from American farmers.

While the blend of spices that sets Chick-fil-A’s chicken apart remains a secret, locked securely in Chick-fil-A’s home office in Atlanta, the rest of the recipes reveal a quite simple approach – fresh, clean ingredients made from scratch each day in more than 2,000 restaurants throughout the country. 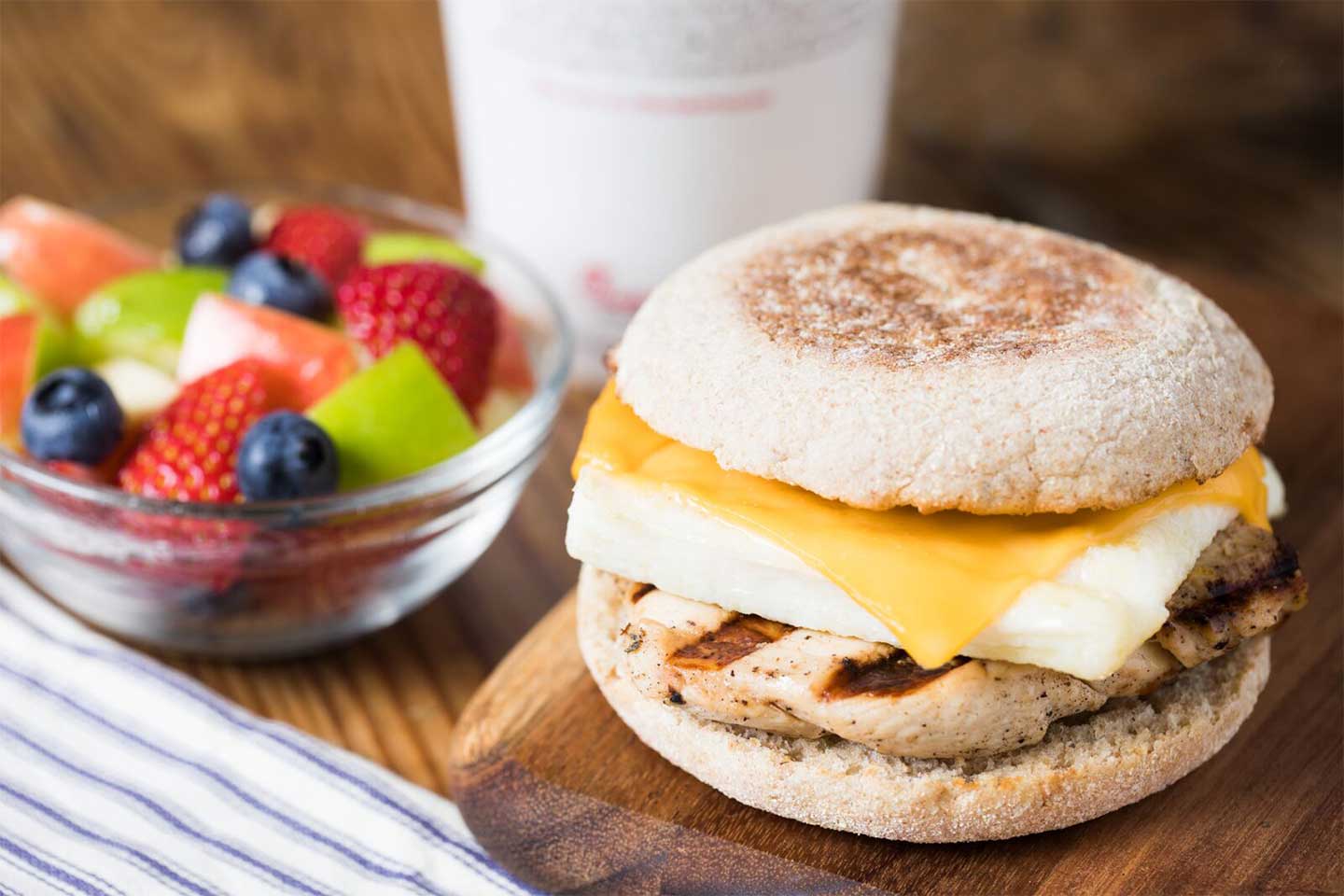 Breakfast. The most important meal of the day, right? It’s also the one you’re least likely to plan ahead and most likely to eat in the car – or with one hand while the other hand holds a briefcase and/or a child. Despite everyone’s best efforts, it’s easy to get off track in the morning when you’re watching the calories.