Like businesses across the city, the restaurant was forced to close because of rising water, but Urban went in to check on the damage.

Meanwhile, all over Houston, the devastation was flooding streets and homes and forcing schools and businesses to close, but was also triggering an extraordinary effect: bringing together neighbors to help neighbors -- by the thousands.

And soon on that Monday morning, Urban would be no different.

“The phone just kept ringing,” Urban says. The only person in the restaurant at the time, he didn’t answer -- until he saw a number on the caller ID that he knew well.

“I saw Mister JC’s number so I picked up.” JC Spencer and his wife Karen are regular customers at the North Houston Chick-fil-A.

“He comes in every day. Sometimes twice a day,” Urban says. But this call was different than the normal breakfast order Spencer calls to place daily for himself and his wife (two breakfast burritos, extra eggs and no hash browns).

“He said his neighborhood had flooded and he needed help – he couldn’t get through to 9-1-1.”

The restaurant sits down the street from a sheriff’s department and is a regular stop for local deputies and firefighters. On a normal day, it would be no surprise for an emergency responder to be inside. But this was no normal day. So, Urban got Spencer’s address and called a coworker, Cindy Smith.

And Smith responded. Her husband loaded up his fishing boat; his neighbors hopped on their jet skis.

The group headed out on what would normally be a 20-minute drive from Cypress to North Houston, but was now a boat ride through streets turned into rivers with a strong current.

“Our neighbors actually got thrown off their jet skis on the way,” Smith said. “It was dangerous for sure, but we felt compelled to help. The city is asking people with boats to help because first responders are overwhelmed.”

Smith’s husband and neighbors arrived to find the Spencers stranded in a home with the first floor flooded, but in good spirits. The couple loaded their belongings on the boat and hopped on the jet skis – escaping the flooded home and creating a moment captured in Harvey history and shared nationwide.

The Spencers’ boat ride took them to safety with neighbors living on higher ground, just hours after making that call for help.

“It was the only phone call I answered and it just so happened to be the call that helped rescue them,” says Urban.

“I know people would do it for us,” says Smith. “It’s the right thing to do. This disaster shows that people do care about each other.”

The Chick-fil-A Foundation is matching each dollar donated through the Chick-fil-A One mobile app, or here on our website, up to $500,000, to meet a goal of $1 million for the American Red Cross. Please join our efforts to help those who have lost so much. Our thoughts and prayers will continue to be with those impacted. 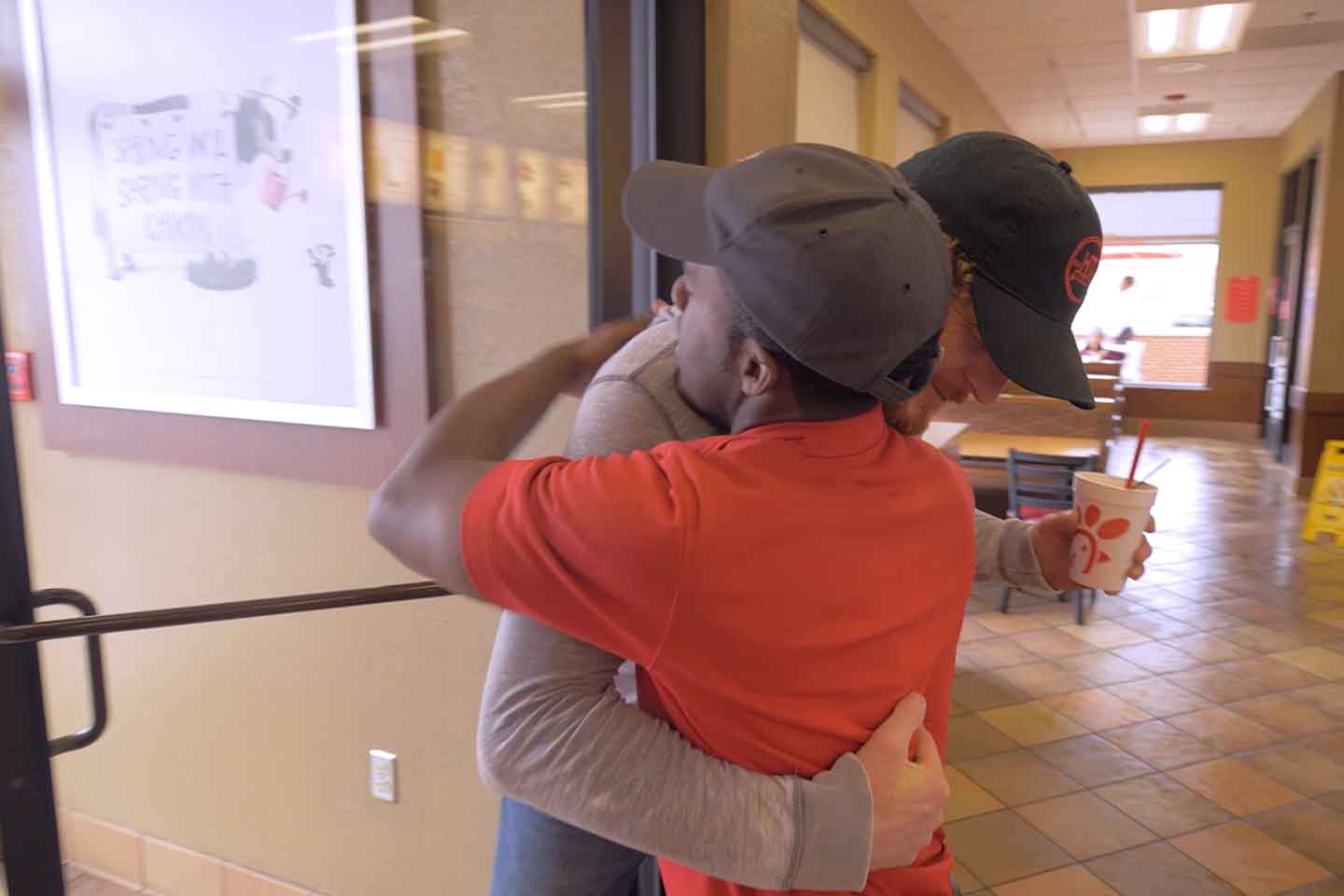 It was just a few dollar bills and some loose change. But to Marcus Henderson, a Team Member at Chick-fil-A 82nd Street in Lubbock, Texas, it was a chance to do the right thing, and this small kindness turned into something big.