It is a truth of restaurant leadership that when a customer comes to the counter and asks to speak to a manager, the ensuing conversation is not always pleasant. Katie Pendergrast, the 24-year-old night manager of the Turkey Creek Chick-fil-A restaurant in Knoxville, Tenn., walked toward the front of her restaurant at 5:30 p.m. Saturday, December 12 “wondering what had gone wrong.” And when the man who had asked to see her motioned for her to follow him to the side of the store near the Christmas tree, she was even more concerned.

“But he said, ‘Every year my wife and I try to give something back,’” she recalled. Then he handed her an envelope with $1,000 worth of $20 bills. “He asked me to take the money to the drive-through window, pay for people’s meals and tell them this is the season of giving.”

“He handed her an envelope with $1,000 worth of $20 bills. “He asked me to take the money to the drive-through window, pay for people’s meals and tell them this is the season of giving.”

Surprised, Pendergrast asked the man if he was serious. He said he was, and left without giving his name. She immediately called her supervisor to make sure she was allowed to accept the money and use it as requested; after receiving approval, Pendergrast went to the window to begin a two-hour process that paid for the meals of nearly 150 customers, combining the anonymous donation and individual gifts from customers who wanted to participate by giving.

“It was just a lot of fun,” she said. “People were surprised and happy when we told them their meal was paid for by a man who wanted to celebrate the season of giving. One lady even started crying.”

The “pay it forward” phenomenon – inspired by a 1999 novel by Catherine Ryan Hyde and then a movie in 2000 – now has a nonprofit organized on the principle of giving to someone, often a stranger, without expecting a return. Charley Johnson, president of the Pay It Forward Foundation, says the organization is dedicated to starting a ripple of good deeds around the world. “For the past four years, we have been getting the word out about paying it forward,” he says, “24 hours a day, seven days a week, every day of the year.”

“In the past two years, “pay it forward” occurrences at Chick-fil-A restaurants have been the subject of more than 1,200 news stories across the country.”

In the past two years, “pay it forward” occurrences at Chick-fil-A restaurants have been the subject of more than 1,200 news stories across the country.

This was a “pay it forward” of memorable proportions for operator Marshall Wilkins, who has previously seen the phenomenon at his two restaurants and read about other restaurants experiencing it.

“We know our regular customers, and this gentleman was not one of them,” said Wilkins. “No one had seen him before.”

Wilkins said his employees see individual acts of paying it forward – offering to pay for the meal of the next car in line, often starting a chain of multiple gifts – and have occasionally received $100 or $200 from a customer for that purpose. But nothing on the scale of $1,000.

“Two things came to the top of my mind afterwards,” said Wilkins. “The first is that Christmas is the greatest time of the year. The season brings out the best in everybody. And the second is that this could only happen at a Chick-fil-A because of the people who work here and the customers we serve.”

He is in a position to know, having been with Chick-fil-A since 1981, when he left a sales job at another company to become the operator of a Chick-fil-A restaurant in Johnson City. That was, “back in the mall-only days. I was the perfect person for the company – I didn’t have a lot of money, but I had the entrepreneurial drive and spirit.”

And why has he stayed with Chick-fil-A for 35 years?

“It’s the perfect opportunity to make a good income at a place where I can give back and serve.”

Wilkins has been a Chick-fil-A Operator since 1981

For Pendergrast, the gift from an anonymous customer helped her crew get in the Christmas spirit. “We had just had a really busy Thursday and set a record for drive-thru sales,” she said. “So we were all excited about that. But this was different. It created a lot of energy in the store.  Everybody was talking about it, even the rest of the week and people who weren’t there that night.

“He helped us remember this is the season of giving.” 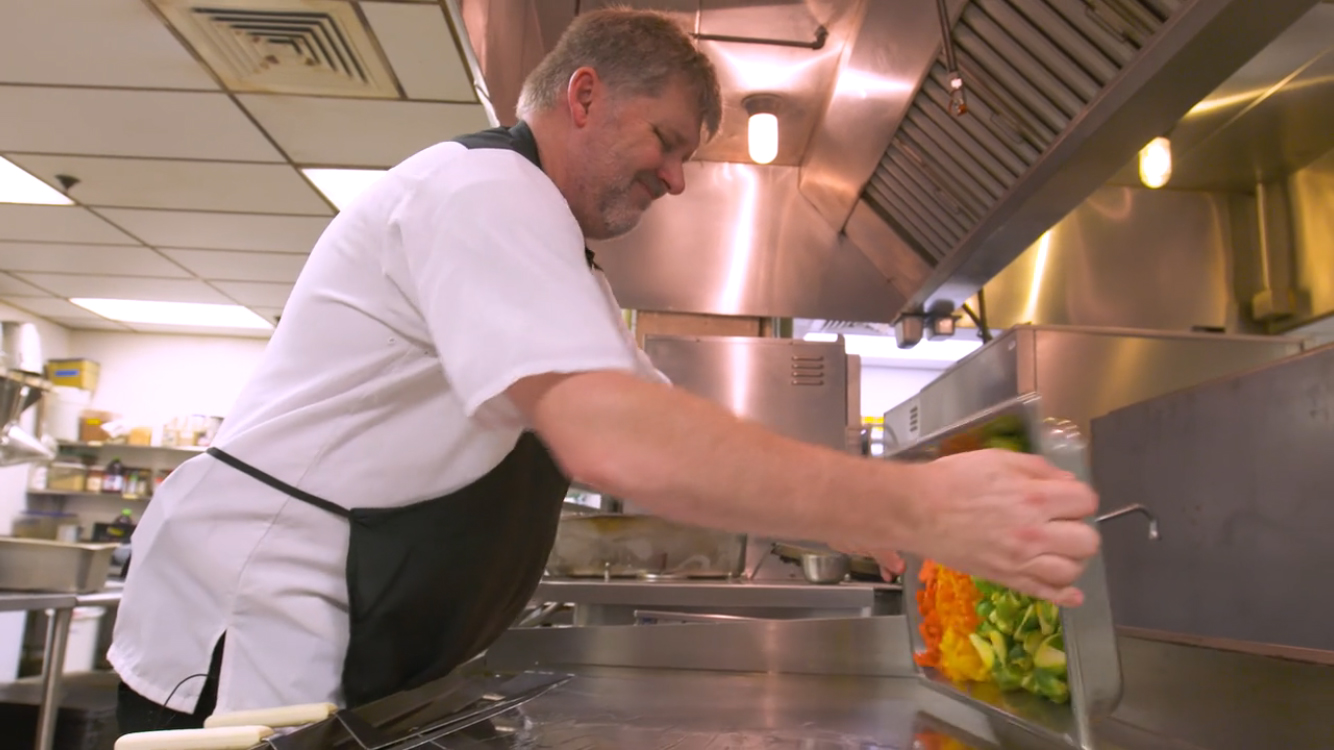 A Chef Who's Making More than Meals for One Community

It’s the middle of the afternoon – two hours until dinnertime – and Chef Howard Agnew and his team are focused on meal prep. They’re chopping the chicken, dicing the vegetables and stirring the sauce. Tonight’s menu is orange sesame chicken and Agnew is expecting hundreds of guests.

When the drive-thru line at a Denver-area Chick-fil-A restaurant stopped moving, Kevin Brock, the local franchise Operator, stepped outside to investigate. What happened next turned his team into a viral Twitter post.